12,000 Entrepreneurs To Be Trained In 3years 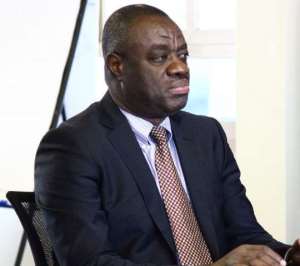 Minister for Business Development, Dr Ibrahim Mohammed Awal maintains the private sector remains the engine of growth which could move the country to its desired level.

In this regard, he said it is the goal of government to train and mentor 12,000 entrepreneurs nationwide to enhance their businesses within three years, adding that beneficiaries of the training would also have access to a GHC 100 million loan with 10 percent interest rate.

Dr Awal, who made this known during the fourth breakfast meeting for Chief Executive Officers in the Western Region, said so far a total of 300 entrepreneurs have been trained in the region.

The meeting, organized by the Ghana Employers Association (GEA), was to enable the CEOs interact and discuss pertinent issues that would enhance the growth and development of their businesses.

He said the government has put in place five driving force pillars, made up of modernization of agriculture, infrastructural development, human resource development, entrepreneurship and industrialization to help develop the private sector.

He said under the modernization of agriculture ‘the Planting for Food and Jobs’ and the ‘One District one Factory Programmes’ would be implemented, adding that in the past two years about a million people have been engaged in the PFJP.

For infrastructure development, the Minister said, government has made available about 2 billion dollars to address the shortfalls in the sector adding that the road sector would be the major beneficiary.

He said everything was being done to address the human resource shortfall in the country, hence the introduction of the Free Senior High School programme and the TVET programme.

Dr Awal said a lot of avenues are being created for the private sector to thrive, adding that the skills development centre and community mining programmes being executed in the Western Region are some of the interventions being put in place by the government.

Mr Kwabena Okyere Darko-Mensah, the Western Regional Minister, also underscored the important role the private sector play in the growth of the economy and urged them to continue to play their roles effectively by paying their taxes.

He said a free zone enclave will be sited in the Western Region and that five private community mines would be established in the Amenfi area.

He said the business world is changing to a technology-driven one and tasked them to brace themselves up and adapt to the current technological world.

Mr Alex Frimpong Chief Executive Officer of GEA, said the lack of affordable capital, ready market, technology and human resources were the major challenges facing many businesses in the country.

He called on the government to assist them by getting them affordable loans and a ready market to enable them to stay in business.

Many of the participants expressed their concerns about the numbers of taxes being introduced by the government, infrastructure shortfalls and the difficulties in assessing loans from the bank.

It’s better to print money to settle depositors and win 2020...